Make Facebook a Better Place in the New Year!

At its inception in 2004, Facebook had a seemingly innocuous mission: to connect friends. 7 years and 800 million users later, the social network has found its way into most aspects of both our personal and professional lives.

Recent enhancements have all been focused on one thing: more sharing.

Are you finding it increasingly difficult to thumb through newsfeed without rolling your eyes? With more to share comes a greater opportunity to aggravate and annoy.

You have to figure that since Facebook profiles are self-curated, they possess an inherent bias towards the sharing of positive milestones. Friends are more likely to post photos of their cool new flat screen then mention being passed up for a promotion. And so, Facebook has become a culture of subtle competition and one-upmanship (both, natural triggers of anxiety and resentment).

Do your friends a favor; don’t be that facebook-er.

As a marketing professional, I tend to think of Facebook as an individual’s “corporate website.”
It’s home to the brand that is you.

In that spirit, commit to providing a better “customer” experience in 2012!
Be classy, engaging, and whatever you do, don’t look desperate.

Think of it as your corporate logo; your first impression on others. It should capture your essence.

It shouldn’t be more than a year old. (What extra wrinkles/pounds are you trying to conceal?)
If the season is wrong, it shouldn’t be glaringly obvious. (Don’t be sled riding in July)

And, while we’re talking pictures…

Don’t upload an entire “roll” of film - (spare us the 9 near-identical versions of a shot you were trying to “get right”).
Don’t upload photos sideways or upside down.
Don’t upload images that are blurry.
Don’t upload large spans of pictures only to leave them caption-less - (Some are self-explanatory, but followers want to know your take; why are the images significant/worthy to you? – TELL THEM!).

Then, there’s The Status Update:

Your updates are not away messages.

I mean, what are we supposed to do with these?! “Yum! I like Chipotle too! What did you have?” What a waste.

Mom’s #1 reason she won’t join Facebook is she “doesn’t need to know what someone is eating for dinner.” Listen to your mother, and don’t post such useless drivel. 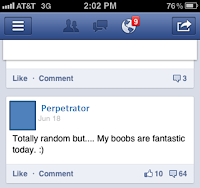 Don’t post if you’re just looking for compliments or attention. You just look pitiful. Whatever feedback you receive is disingenuous because you had to ask beg for it.

If you need someone to talk to, close Facebook and open your phone. If you’re having a real problem, call a real friend. These kinds of updates make your nice, close friends uncomfortable and your mean, not-so-close friends gossip about you.

5. We Don’t Want to Work Out With You

WARNING: if you upload a shirtless locker room mirror picture, we're posting it to guyswithiphones.com.

Has there ever been a more desperate cry for attention? We all thrive on the occasional, “wow, looking good man.” But, trust us; it feels better when these compliments are earned, not begged for.

When it’s ok: When you’ve been training for a major event – first competitive run, an Ironman. By all means, share your thoughts on crossing the finish line, share pictures taken. Friends may even offer their congratulations.

Anyone who posts amorous messages with certain regularity is only trying to cover up how terrible their relationship truly is. It’s been proven. If you are in a long-term, serious relationship than you SHOULD love them; it’s assumed and doesn’t need reiterated in our newsfeed.

When it’s ok: Milestone events. You get engaged or are celebrating your anniversary.
Your significant other does something that “is SOO him/her.” In these types of instances only is a single, semi-sweet shout-out permissible.

Ah yes, the other side of the coin.

You look childish when you make the fallout of your relationship public. Crazy even. Relationships are personal and complex. Even your status change from “In a Relationship” to “Single” should be hidden. Especially refrain if you aren’t 100% certain you are over for good. You know the story: Relationships hit a rough patch. Lovers air their dirty laundry on Facebook. Friends take sides. Couples make up and friends are forced to welcome cast-offs back into their good graces. ::Awkward::

Side note: if you see a post about a break up – DO NOT COMMENT. It only perpetuates the lunacy and makes you look petty. 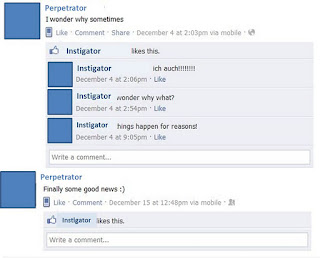 What are you, some desperate television premier trying to build rating with mystique? If you want to tell us something, just say it.

There will be times when you have killer news you want to share but can’t (you accepted a job but haven’t quit your old one) – we know it hurts, but hold it in. Wait for the big reveal. 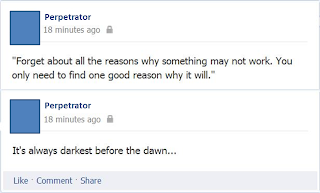 Yep, there you are. A regular Billy Collins wedged between a YouTube video of a drunken girl lip-syncing “Super Bass” and a foursquare notification of an ousted mayor (see #9). If you need insightful prose or song lyrics to get through your day, write them on your hand, not on your wall. 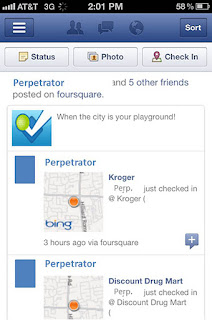 If we wanted to know you were at the Post Office, we’d follow you on foursquare. Different Social Media platforms exist for a reason. Use each channel for its intended purpose and don’t be redundant for those that dare follow you on multiple.

These status updates are sad. Not funny, not cool – just sad. No one wants to know they’re friends with a proud douchebag or slut. If you want to be wild that’s fine, sign off Facebook and keep your exposure limited to those in your immediate (physical) presence. 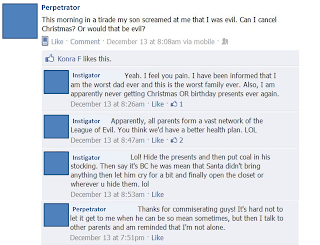 Why does having a child trigger the social media death of some mothers? One day you’re thumbing through your newsfeed and, surprise! You’re friends with another infant! That’s right, there’s a baby posting updates to your feed, commenting on your wall. Don’t be that person.

We are friends with you, not your child.  Stop sharing the natural progression of child rearing. We all learn how to sit on a toilet. While perhaps a big deal within your family, it’s not interesting to your entire pool of Facebook friends.

When it’s ok: 1-3 posts per month MAX (and it better really be something)! Share funny things that are uniquely your son/daughter – things that are manifestations of your child rearing.  Reader’s should smile and say to themselves “Only so-and-so’s kid would say/do such a thing!” 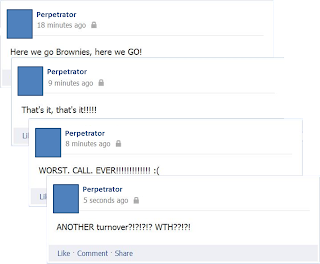 Everyone that cares about the game is already watching. All you’re doing is bombarding non-sports enthusiasts with irrelevant updates! You want to be able to share your thoughts on every play? Get a friend to sit and watch with you. Don’t have any friends? Go to a bar where the game is playing and force yourself upon a captive ear. These are the people that might actually care about your up-to-the-minute commentary.

Yes, poking fun of yourself on Facebook is ALWAYS welcome. In that same vain, extraordinary, unique, catastrophic, and hilarious feats; all welcomed updates.

As much as I fantasize being happier without social media, I know the opposite is true.
An extrovert by nature, I know I’d feel isolated. I can’t tell you how many of my conversations in the real world revolve around content first consumed on Facebook. With social sharing of news and other media growing, it is becoming increasingly more difficult to keep up with what’s current without one’s newsfeed.

While Facebook can make you hate your best friend, (or at least their online persona) – not tuning in will drive you mad.

It's time for you to weigh-in.
Any other “Resolutions” to add?