An iPad is NOT a Box of Tissues

A friend shared an interesting article the other day, discussing concern over the Apple iPad becoming the next Band-Aid or JELL-O.

Traditionally, it’s one of the biggest contradiction’s in business – companies do all that they can to establish their brands as household names. But what happens when a brand becomes so engrained in the lexicon of society that it becomes synonymous with the entire product category?

I’m not sure Apple has anything to fear.

I’d say “genericization” is a bigger issue with non-specialized, commodities; product categories with little to no differentiation between competing brands.

I mean, no doubt a portion of the less informed public will refer to all tablet computers as “iPads.”

But that’s not the buyer Apple is trying to attract.

And let’s be honest, even when/if laggards finally decide to buy in the category, they’d only balk at the iPad’s premium price and opt for a cheaper tablet with fewer bells and whistles.

A tablet computer is not something you simply throw at the bottom of the grocery list, next to bread and paper towels; it’s a major buying decision!

The less informed you are as a potential buyer, the more research you’ll conduct prior to purchase.
If that research is online, I promise if you search “iPad,” you’ll arrive at Apple’s website (Google’s animosity aside).

If you’re the type that prefers to compare products in-store, no doubt employees will be on-hand to set you straight on iPad vs. competing alternatives.

And Apple doesn’t hold THAT much of the market 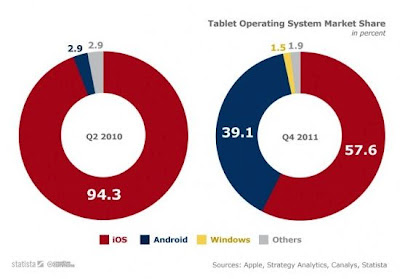 No question, iPad is the tablet for which all other tablets aspire to be. It’s quickly becoming the standard on which all others strive. But at 57%, its market dominance is not at the level of “genericization.” And with stronger players recently arrived (Amazon) and still to come (Google), that dominance will only continue to dilute. Keep market share up - that should be the focus.

Original article sourced in the image above.

iEverything. Apple’s entire suite of products and services roll up under an iron-clad family branding strategy. iTunes, iMac, iPhoto, iCloud, and iPhone - iGet it, they’re all related! It’s what allows less-informed consumers at large to quickly identify all Apple’s products back to a single source.

Should Apple be concerned?
Posted by Unknown at 7:00 AM