Logo debuts at ONE World Trade Center...and not a floor too soon.

The steel skeleton of 1 WTC reached the 100th floor this week. Having just visited the Big Apple over the Easter holiday, I have to share progress from my vantage point: 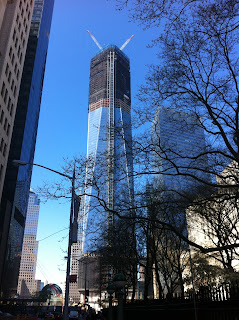 With only four floors to go in its climb, the developers must have felt it was time to kick marketing promotions into high gear – it's logo time!

Promotions 101: Changing names half way through confuses your audience.

During the early stages of the redevelopment and build process, the skyscraper was bestowed the deliciously white-trash moniker of “Freedom Tower.” (Look, I’m as patriotic as the next guy, especially in the shadows of 9/11 – but there’s something off-putting about the word “freedom” in product marketing. All I can picture is a garish billboard buried deep in the heart of rural, ultra-conservative America – undoubtedly boasting a shoddy illustration of a bald eagle and the word “GOD” in tall, intimidating letters.)

I’m not sure why the decision was made to change the name to One World Trade Center. Being it the name of the original tower, I’m sure there was heated debate and contention on both sides of the argument.

It’s important to remember that in general terms, buildings designated as “world trade centers” exist all over the world – Wikipedia lists 57 in the U.S. alone.

So fundamentally speaking, the new tower would have picked up the task of “instrument for trade expansion” in Manhattan left vacant with the fall of the Twin Towers – regardless of naming convention.

I’m happy with the change and synonymous nature of “One World Trade Center.” 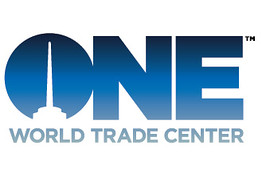 By placing stronger emphasis on “ONE,” the logo combats the naming dilemma surrounding the words “World Trade Center” right away.

There’s also something about the word/number “One” that’s innately superior and bold.

First. Premier. Proud. The Best. There’s only ‘One.’

Once erected, the tower’s spire will reach a very symbolic 1776 feet. The logo’s design ties together to that structural element and the perception of “America” and “One” within the letter “O” itself.

Regarding color, the rich blue is almost hallowing – as if in its regality alone the design pays tribute to those lost in the original Twin Towers. The fade reinforces this – it imparts a feeling of a cool, blue horizon – honoring those who were taken too soon from this Earth.

Too gushing of a review?

Fine. If we had to say something bad, it kind of looks like it might be better suited to represent a news network than a building; it feels a little mid-nineties.