Two billboards along the Las Vegas stretch of Interstate 15 caused quite a stir during yesterday morning’s commute. 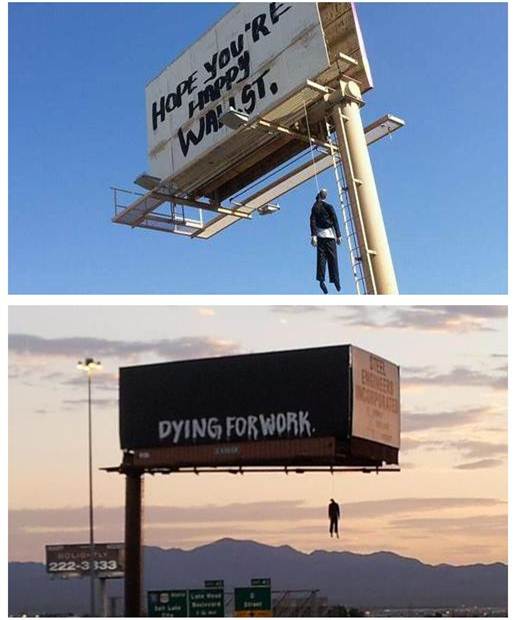 “Hope you’re Happy Wall St.” and “Dying for Work,” the two graffiti-styled messages were not the work of legit advertising, but vandalism.

But can you imagine if one of these caught your eye during rush hour?

Traveling the well-worn routine at 60+ mph, would you have been able to gauge and dismiss the legitimacy of the bodies swinging just below the chaotic message?

While no immediate leads on the parties responsible, the billboards were taken down within a few hours of the first frantic call.

Following their quick response, local law enforcement officers were bragging about how “the vandal’s intended message failed,” but did it really?

Helps?! It basically guarantees it.

Sure, the span of time the mannequins were left hanging was brief, but what an impact made on those that saw it! Even those just catching a glimpse on the evening news or next morning’s paper will feel some of the affect.

Why? Because the haunting nature of a hanging body is universal.

Beyond reminding us all of our own mortality, it broaches the tender and somewhat unspeakable subject of suicide. In this particular case, it associates it with the desperation/sense of failure that stems from job loss.

With the highest sustained unemployment of any state and no real hope in sight, the acts will no doubt trigger emotion in the exposed demographic (Nevada/Las Vegas-area residents).

Now we know these rogue advertisements weren’t produced for any brand or legit cause, but their impact begs the question:

When it comes to securing recall, how far can you take “shock?”

Physical danger, raw emotion and sex – all ok (and highly effective) when applied to advertising.

But what if a movie currently playing in theaters (i.e., Seth MacFarlane’s Ted) elected to promote via mention of Batman and the Aurora, CO theater shooting from last month? Suppose they crack a light joke in hopes of increasing their own patronage?

To be effective, shock-value should be ambiguous and vague.

It can’t be tied to a specific event, isolated or universal, or it becomes too real.
Don’t get me wrong – taking shock too far still increases recall (I would argue more so than shock in its mild- to moderate-form) – but often at the detriment of brand equity.

The billboards got their message out loud and clear. Had they have been linked to a specific company or association however; the brand would not have received any residual benefit.

In an area plagued with job loss and increased thoughts/instances of suicide, they hit below the belt.

No one likes a bully.

Don’t cross the line with shock. Use sparingly.