New Logo, Hold the ‘Pizza' - Domino’s Continues to Navigate the Sea of Change.

The first step to change is recognizing you have a problem.

Since 2008, the undisputed leader in pizza delivery has been full steam ahead on their campaign to self-improvement. First was menu expansion then an open and honest, fully transparent campaign to reinvent their pizza recipe from the ground up (which we reviewed earlier this year in Embrace Your Haters).

Consumer behavior has changed. While delivery still makes up the majority of Domino’s business, 30% of customers are now opting for in-store pickup.

With employee-selected music blasting from a corner boom box and little more than a dingy gumball machine boasting sun-faded Skittles and Runts, legacy storefronts are not the most inviting to patrons.

This year more than a dozen test locations have popped up across the US. Boasting new customer-centric features like comfortable seating and big-screen TVs, virtual order kiosks and grab-and-go refrigerators containing soda, salads, yogurt parfaits, cookies, and milk.
The most radical new addition however, is a totally re-imagined open-kitchen concept.

From closed off, dark and dingy to open, bright and cheery – Domino’s is making the final turn in their journey towards total business transformation!

No doubt the best way to signal there’s something new on the inside is by changing what’s on the outside. 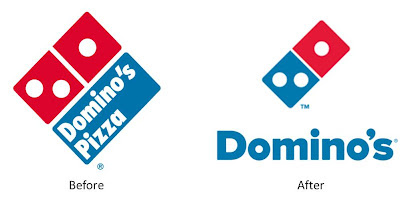 Nothing revolutionary here. Rather, a logical next-step in the life of an image that has grown tired with time.

Preserving the past while setting the tone for the future, Domino’s new badge follows the trend of tried-and-true compromise. Gone is the visual so akin to the look of their delivery box. The next iteration maintains the signature red and blue – now combined onto the face of the domino.

A signal of what’s to come?

We wonder if by dropping “pizza” from their name, the chain is preparing for an even wider menu extension (See the Starbucks Coffee 2011 logo redesign for more info).

The updated logo is also; shall we say, more palatable for social/mobile consumption? Built-in to the simple, crisper look is the ability to scale down without compromising integrity. Whether on the big or small screen, billboard giant or social media avatar, Domino’s new look makes an impact.

But is the logo instantly recognizable the world over?

Like the Nike “swoosh,” Target bullseye, and Ronald’s Golden Arches, Domino’s intends to use two variations on their new look – one with and one without text.

Regardless, we’ve been a fan since the onset of Domino’s self-induced road to recovery and we’re delighted to see they’re committed to staying the course.