Samsung out for blood in latest iPhone 5 attack ad


Why can’t we all play nice?

Apple has had its share of playground-rate tiffs throughout the years; friends turned enemy then back to friends. In a hyper-competitive, high-growth market like mobile tech it’s to be expected.

But a landmark billion dollar settlement awarded Apple for convicted patent infringement may prove too much for Samsung to simply “get over.” They may not have paid the entire settlement in coins, (as rumored via viral internet hoax last week), but they did come out with this pointed ad just days after Apple’s launch of the iPhone 5: 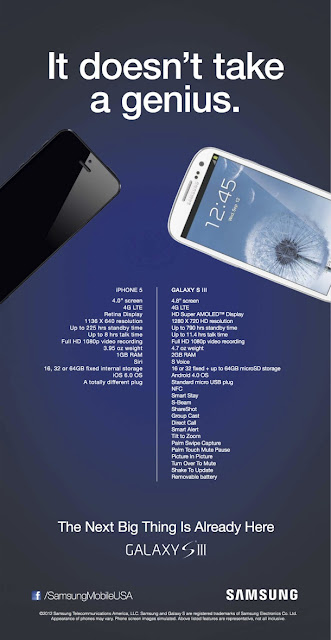 Although clearly rushed on the creative process, the headline boldly seeks to undermine the “Apple Genius/Genius Bar” mantra that pervades Apple’s in-store experience.

Samsung: “Our list of features is longer. We are superior.”

OK, so the head-to-head list of features shakes out in favor of Samsung’s Galaxy S3 – big shocker. We’ll ignore the fact that even before Apple’s list runs dry there are a few wins for iPhone (it weighs less and has more fixed internal storage).  We’ll also ignore the ties (4G LTE/Full HD video conferencing) and spurious comparisons that are a matter of personal preference (Siri vs. S Voice, obvious difference in OS).

Are the remaining 14 features Samsung included in excess over iPhone 5 even fair? Sure, there are a few clear omissions by Apple – NFC/mobile wallet functionality for one.

But the rest are arguably insignificant attributes; largely obscure and mostly software-based.

If we’re going to be fair, where’s iPhone’s list of Apple-specific/proprietary bells and whistles?

Where’s passbook and Game Center? Where’s all the talk of iBook and iTunes integration?

Advertising doesn’t have to be fair (and Samsung paid to create and place the ad).

There’s no doubt the S3 is a fine phone. But there is one small, ever-present marketing reality Samsung might be overlooking.

I shelled out more than $300 last Friday – practically blind.

I bought a mobile device I’ll use hours a day, every day for the next two years without having held it in my hand. And I did it in a heartbeat. I locked myself into a two year contract with a company I hate just to make sure the process of changing carriers didn’t get in the way of my receiving my iPhone 5 day 1 of its public release.

We don't buy iPhone for all the features. We buy it for all those eccentric, irrational, peer-induced, often emotional and maddening reasons that make us human.

Samsung's biggest problem isn't that it lacks a strong bench of rational attributes. It's that the brand hasn't captured consumers' hearts.

For that, I’m afraid you do need an element of genius.
Posted by Unknown at 2:00 PM