Oreo has been on a creative roll these days

When I was a kid I swear there were just two varieties of America’s favorite cookie – regular and double stuffed.

Today there are seasonal colors and flavors, mint, peanut butter, and ones covered in dark and white chocolate shells.

And while I wasn’t smart enough to nab the now cult-classic Birthday Cake Oreos earlier this year, I stocked up on the Candy Corn Oreos in advance (über-scrumptious, fyi – smell like candy corn, but taste more like butter cream vanilla).

They won’t back down on delivering killer advertising either.

First, there was the commemoration of 100 years (where we missed out on the “Birthday Cake” variety). Through a series of nearly 20 print ads, Oreo played out several monumental moments of the past century with little more than their signature cookie.
Then there was the infamous rainbow/Gay Pride graphic first released on their Facebook page (kudos for upholding your stance even amidst threat of boycott). 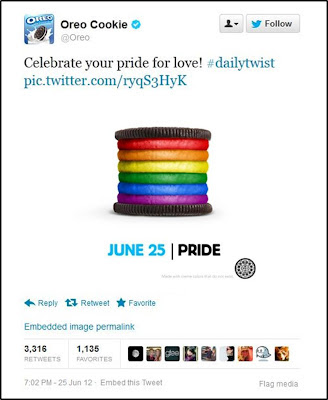 Now, this little gem of an ad, I first noticed this morning on the way into work. 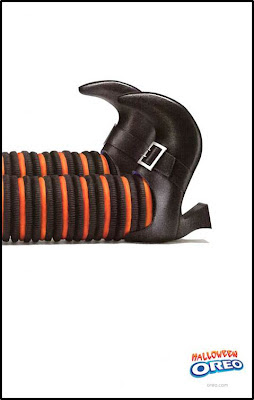 Simple elegance that delights the imagination; enforced by transforming product into art.

Where have we seen this style before? Oh, that’s right. Apple (and a recent run of ads by LEGO).

And while they may not have invented the style, Oreo gets an ‘A’ for application.

The concepts are beautiful and thought-provoking. And really, what other creative choice is there for a century-old cookie? When you reach “icon” status, it’s time to sideline features and benefits (of which Oreo has few) and simply reinforce brand stickiness.

If you’re on twitter, you have to add @Oreo.

Relax; they won’t clutter your feed with 1000’s of tweets and RT’s. Much like a daily tear-away desk calendar, they’ll provide you thought-provoking nuggets of history by date, all in Oreo-signature creative.
Stellar work, Oreo!