WeightWatchers’ new logo trims the fat (exposes something else).


It’s been awhile since we’ve done a Facelift/Faceoff Friday challenge.

That’s because most companies wouldn’t think about undergoing a brand transformation amidst the calamity of the holidays. Unless of course Q4 is one of your least busy seasons and your gearing up for a rush that inevitably comes with the start of each New Year.

New Year’s Resolutions are what keep WeightWatchers in business.

And so as the weight loss/monitoring juggernaut prepares to usher in a new class of self-loathing pound shed hopefuls, they decided to give their brand a quick tummy tuck. 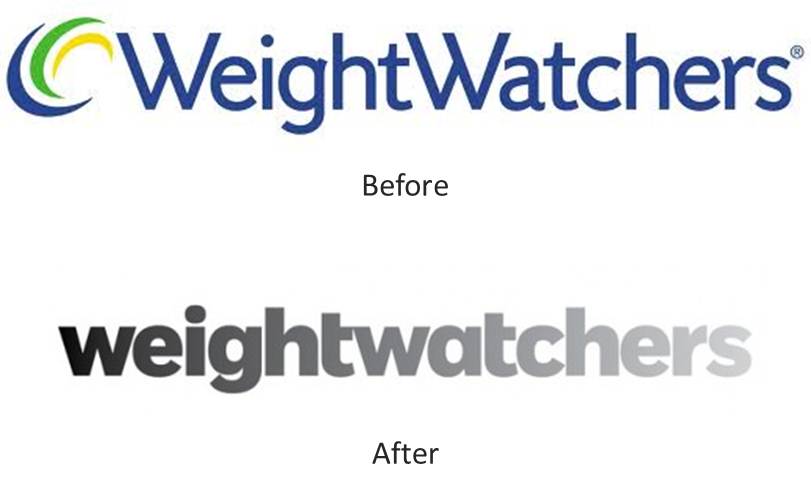 Personally, I saw nothing wrong with the last one. It was bright and active, slim and flowing – all the things you’d want your experience with weight loss to be. It didn’t feel dated or as if it had lost its impact.

The new logo falls victim to the same trend in brand homogenization we described earlier this year. It ditches much of what made WeightWatchers stand out, opting for a mega-simple, ultra-reductive treatment comprised of a single case, single color, and dime-a-dozen font.

Relax. It does a few things right.

As you move from left to right, the fade from black to gray to white feels transformative. In that regard, it conjures up a notion of what the weight loss process should be; starting in the dark, moving to the light.

It also feels more masculine (or, at least not feminine), an arena WeightWatchers has been trying to break into since adding basketball legend Charles Barkley to their portfolio of celebrity endorsements last year (did he give up the Taco Bell spots or is he just a post child of confliction?).

But wait. Look again. What’s that in the center?

Oops. By dropping all casing, the words ‘weight’ + ‘watchers’ become a 14-letter game of word find (and with a second glance, my eyes found a doozy). True, the word has several meanings. But none of which a woman wants top of mind as they embark upon their new diet.

How does this not get caught during the creative process? Has no one at WeightWatchers or the agency of record run into similar issues when combining the words before?

One thing’s for sure – if you didn’t notice it before, it’s all you’ll see now.

All is not lost. A simple reversion back to the upper/lower formula would dilute the impact of stringing all the letters together. It’s a quick fix, but will it get applied?
The current form is up on the site now – I can’t imagine it will make it into 2013.
Posted by Unknown at 10:00 AM