A New Bird in the Sky? American Airlines

Image is important; you’ll hear no argument of the contrary here.

And when you’re staring the prospect of dissolve dead in the face; image can be the Hail Mary pass that keeps you in the game. 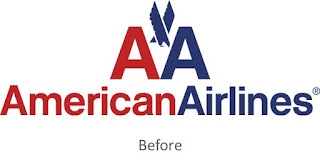 I thought it was older…

Designed back in 1968, the current mark is quickly approaching 50. How can something feel so iconic and yet so ordinary at the same time? Helvetica bold with tight kerning; is that what it boils down to? And while the red feels a bit brighter, I know that blue is straight off the American flag.

The eagle is the most inspired piece of the puzzle, but rigid and hard – more suited to stand for a government entity or military service. A quicker glance and it almost looks like an abstract take on the cancer support ribbon (sans top fold).

For the first time, AA’s logo and brand feel separate but equal parts of the full identity.

Here the font is just a touch more casual; sharp edges are sanded down for a softer, less drastic appearance. Gone is the Betsy Ross era of shared colors. The new brand bestows upon the text a rich navy-gray while the logo itself calls upon a bright range of both red and blue.

And what about that “logo?” Is it a bird? Is it a plane (wing)? Maybe both. Regardless, it gives the brand some depth and movement that the old logo lacked.

Applied to product, the introduction of a third brand element on the tail is lost on me. It feels a bit too patriotic (the bad kind) and basic; as if it should be eminent domain of the American people and not tied to an individual brand (however “American” they may be).

Why not simply apply the new eagle/wing logo to the tail?

So, what do you think?

We approve.
The first new logo of the year, and it couldn’t have gone to someone more in need.
How did we miss AA when we assembled our 2013 new logo wish list?

But will the change be the fresh start American needs or just a blip on the radar as they fade into the sunset?

Only time will tell, but never underestimate the power of new visuals.

The key lies in follow-through. A logo is highly salient; but all brand interactions, customer service, in and outside the cabin, need to follow suit if AA has any chance of escaping the ailing sentiments now associated with their name.