The Michael Sam Kiss: Opportunities Met and Made

When Michael Sam was selected by the St. Louis Rams in the seventh round of the 2014 NFL Draft, he made history as the first openly gay player to be admitted to the league.


Moments later, he made history again, when upon receiving ‘the call’, Sam’s celebratory kiss with his boyfriend was broadcast live as part of ESPN’s continued coverage of the Draft.

[I don’t have to include a photo of the moment here, right? Y’all don’t live under rocks.
You know what, fine. Here. Take it.] 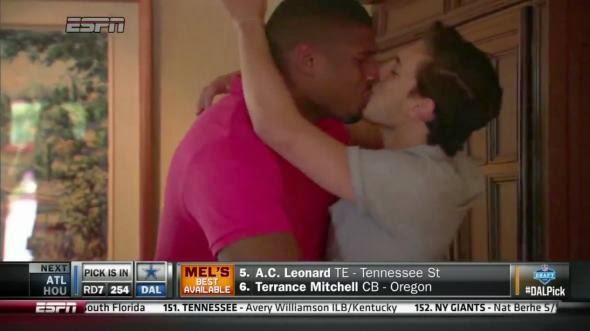 Now almost a week later and the pro-vs-against battle rages on.

Our more conservative constituents – (that’s the “anti-kiss” side of the equation) – are calling ESPN’s decision to broadcast the tender moment a blatant opportunity to generate buzz and make news.

I can agree with the claim, even from the liberal side of the equation (and when am I not?).

But I can still agree that ESPN saw the potential for personal gain in broadcasting the moment.

You want to know why?

Because if ESPN thinks gay = gain, and we all know in business that gain = good, what ESPN is really saying is gay = good (and THAT’S good).

It means that another organization (a traditionally macho one at that) sees the up-side of “coming out” as pro-gay (or at least gay-tolerant).

It says to me that ESPN has checked the pulse of an ever-changing world and made account for the gradual but persistent trend in tolerance when it comes to sexuality.

They are making a (business) choice to include homosexuality as part of the mainstream.

Sure, the cynical side of me can say “they’re using our way of life to get attention/boost ratings.”

[Note: I had to shake a similar notion when I first saw the Honey Maid “This is Wholesome” and “Love” ads – how else could they get THIS MANY PEOPLE talking about crackers?]

But with more and more brands coming on board, those types of self-serving benefits will wane.

The long-term benefits belong to the greater good!

Increased exposure adapts the mind for a new definition of “acceptable behavior.”

Our Conservative counterparts call this FORCING the homosexual agenda (their phrase, not mine). Look, we’re never going to get EVERYONE on board. Right and wrong are deeply entrenched in our being, a summation part enculturation and part intuition.

I don’t need everyone to be OK with me, but I’m grateful to see that big chunk in the middle softening on the issue and widening their perspective on “normal”.

Talk isn't cheap.
We owe a huge debt of gratitude to the brands that make room in their broadcast.
-DS

PS: Sorry it has been so long! What can I say, duty calls -- there's real work to be done! I will try to better manage my time and schedule in a few more rants per month. Appreciate your attention, as always.