Mobile Wars: Who Has the Balls?

Remember where you were just a kid at the amusement park jumping into the big pit of musty plastic balls? Well, now you can relive that same fun-for-a-few-minutes-than-gross sensation during most any primetime commercial break, courtesy of the mobile phone carrier wars reaching a new height in laziness.

It started out well enough.

There’s no doubt Verizon’s “A better network as explained by ______” series was devised to tackle the age-old challenge of demonstrating superiority in an otherwise homogenous services industry.


All were called upon to help make tangible the argued benefits of the Verizon network.

And then they got the balls…

Simple enough, right? The demonstration is easy to follow; the message is clear, but also, a first in the campaign to illustrate the shortcomings of rivals by comparison. Who’s gonna stand for that?

And so Sprint got the balls…

And then T-Mobile got the balls…

Not one, but TWO spots! (ONE during the Super Bowl, guest starring Steve Harvey!)

Sorry, AT&T doesn’t have any.

…At least at the time of publishing, but who wants blue balls anyways!? (Wink face) 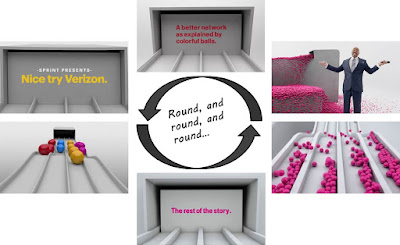 Here’s Why it Doesn’t Work.

Look, the spot fits as part of the overall “Better Network as Explained by …” series. It’s a simple premise that works as part of a whole, a single chapter in a larger story.

But as the rebuttals by rivals start to stack up, the impact of each gets diluted.

Who can remember which company is claiming what based on which independent study of what sample pool, etc. anyways?!

Don’t hold us captive to a public splitting of hairs within the construct of a competitor’s campaign!

Advertising budgets are small. Why blow them on direct responses to your category leader? Your negation of Verizon’s claims should ENTERTAIN us! (Ok, the T-Mobile spot with Steve Harvey comes close. It’s self-deprecating and timely, but our minds shift to the Miss Universe flub and we forget why you’re so great).

Fine, if you simply must “set the record straight”, do it in your own style!

Kick Verizon IN the balls and cut a different comparison that feels on brand!

When you respond direct and use the same format, you are letting Verizon set the terms and parameters of the conversation. Mock the simplicity of their latest series, question their intentions behind “simplifying” mobile.