A game of one-upmanship might have forever changed the rules of retail’s “biggest day.”

Ok, shopping the day after Thanksgiving is not for everyone. We’re not taking sides (team Black Friday!) - love it or hate it, this article is about the marketing strategies behind a marquee retail event under fire.

Ten years ago, the fear was that online shopping would kill Black Friday (along with traditional retailing as a whole). In reality, the two get along quite well, eCommerce perfectly content living in Black Friday's shadow come 'cyber Monday.'

No, it turns out Black Friday is its own worst enemy.

Black Friday's goal is plain and simple; be the first stop.

It starts with price.
If you can rope shoppers in with the best price on one or two most-coveted items, chances are good they'll stick around and buy more. It is not uncommon for major retailers to price highly-sought after items at or even below cost, a strategy in loss leadership designed to attract volume in hopes that their purchase of other items will offset any loss from underpricing.

Yes, in being the first stop, the lion's share of a shopper’s holiday budget is yours to lose! Collect.

Now, time is gaining momentum.
For as long as I can remember, 6 a.m. was the starting line. Stores opened two, maybe three hours earlier than normal. Circulars would hit the newsstands boasting holiday must-haves at rock-bottom prices. Customers would compare and plot their course. History would determine the winners and losers.

Then came the 5 a.m. door-buster.
Then JCPenney boldly went where no retailer had gone before: 4 a.m.

Maybe retailers became fed up with competing strictly on price?
With time, they could marginalize the impact price had on a shopper’s Black Friday schedule. Think about it. You might have been 2nd or 3rd priority in both price and product, but by opening two hours earlier than your competitors, you stood a good chance of being shopped first and shopped hard. It was a new (and highly influential) variable.

Downside: time is only a temporary competitive advantage.

It’s easily replicable. Once competitors get word of your Black Friday hours of operation strategy, they’ll aim to meet or exceed next year. When JCPenney moved to 4, Kohl’s opened the following year at 3. Benefit lost.

This year's move by many to midnight was matched by competition within days and simultaneously set a new high-water mark for the start of holiday shopping. I mean, how much earlier can we kickoff Black Friday without further disparaging the sanctity of Thanksgiving?

·         Last in a 3 retailer race, Kmart has been open on Thanksgiving Day for several years.
·         This year Old Navy began testing Thanksgiving hours in select markets.

With strategies in pricing and time exhausted, how will retailers look to stand-out against the competition in the future?

Black Friday Strategies of Tomorrow: What to Expect.

Black Friday is about to go Wild West. To glean additional wallet share, retailers will have to go beyond price and time, break from tradition, and get creative.

The rolling door buster/pricing promo.
Placing all bets on a single tactic like hours or price is too risky. Instead of a single event, Black Friday will evolve into a series of smaller, independent promotions – refined year after year. Traditional and online retailers alike have already started testing strategies in rolling promotions. 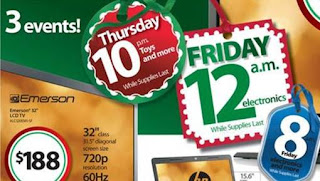 Amazon didn’t just have Black Friday, they had Black Friweek, launching different promotions every day (and every few hours on Thanksgiving, Black Friday, and Cyber Monday). The e-tailer built excitement and intrigue with an omnipresent countdown clock embedded site-wide throughout November.

New Name(s).
Have you noticed the “Black Friday” moniker being dropped in favor of more ambiguous titles? Now retailers are having After Thanksgiving, 2-, and 4-day sales. It’s all in the vein of differentiation. To get attention in today’s cluttered holiday retail space, one has to be unique. And really, with different product category promotions running at different times, each retailer’s Black Friday Sale can be unique.

Beyond (and Before) Friday.
With every hour of Black Friday now exhausted, stores are building new promotions both before and after. Banana Republic offered Black Friday pricing online the Monday before. Others narrowed in on best customer segments and offered limited Black Friday “previews.”

And now, the Wild West.
In the past, the whole store was on sale. All stores opened at similar times, offering similar products at similar prices. But competition grew. Stakes were raised. Standing out got more difficult. Black Friday is becoming an enigma. No definitive start or kick-off. Different products on sale at different times at different stores. As a shopper, the task of organizing your spree can prove daunting.

Hear that, Social Media and Technology?  It’s time for a collabo!
I want to be on the team that builds a social media plug-in for managing Black Friday shopping! I know web forums that speculate, post, and discuss Black Friday ads already exist.  But with all the new variables, we need something more intelligent and collaborative. Picture a virtual calendar that would plot selected stores and associated promotions against one another. An online tool that could query by product: “Show me where and at what times and price I can find product x.”

Users could personalize by importing their gift list and zip code, select intended stores, and BAM - the virtual platform would render a most-efficient route and cost-saving schedule.

Are We Wrong?
Were you out shopping last Friday? What did you think of the crowds? Did they seem smaller? Less congested? Initial reports show sales are up. Perhaps, in Black Friday’s case, evolution breeds innovation! By breaking the sale down into smaller promotions that span a larger, less defined windows of time, demand (and crowds) can be parsed out as well. And who knows? With less emphasis on Friday hours, we might even see stores give Thanksgiving Day a little breathing room back!

What do you predict for the future of Black Friday?