CHICAGO - The doors on the historic Sullivan Center at the corner of State and Madison are back revolving.

Shuddered since Carson Pirie Scott’s exit in February 2007 – Target announced its tenancy early last year, spending much of the past 16 months rehabbing 124,000 square feet of floor space.
It’s the company’s first store in the Loop and first inside a national landmark – added to the city’s historic registrar in 1975, the 113 year-old Sullivan Center is a staple along the loop’s retail corridor.

With a grand opening date set for Sunday, I had an opportunity to sneak inside cityTarget - State Street’s NKOTB - yesterday afternoon.
small is BIG (again)

Scaling back on the Big-box concept is all the rage right now.

Let’s face it; the balance between brick-and-mortar and online sales has reached maturity. In the physical realm, multi-channel retailers face slowed foot traffic and mounting overhead.

Latest US Census data reveals urban living is up 12% since 2000 – faster than its suburban and rural counterparts with a combined growth rate of 9.7%. Not only are more people opting to live downtown but more attractive people.

We’re of course not referring to physical beauty – we’ll leave that observation up to you – rather, the notion of growth in key demographics – college-educated and well-paid, sophisticated next-gen families who are tired of spending weekend afternoons in the ‘burbs carting up essentials.

The Chicago store joins two other premier cityTarget concepts opening this week (LA and Seattle). With two more slated to join the fold in October, (San Fran and a second in LA), it’s more than a pet project for Target.

The retailer is hoping to join other industry pioneers like Wal-Mart, Best Buy and Home Depot already on the shrink-to-fit, urban-bound bandwagon. 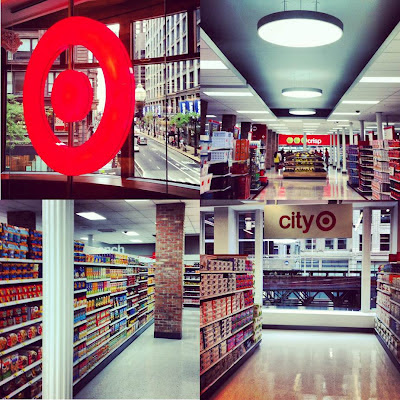 Now for our take –
Target was my first employer, so I like to give ‘em a hard time.

1st vs. 2nd floor balance feels a bit off

Twenty years ago retailers liked to put the detergent in the back corner of the store.

It forced interested parties to traverse the entire floor; increasing the likelihood of impulse buys.

The urban shopper is pressed for time (or at least he pretends to be). Shopping lists are for spur of the moment one-offs; their collection needs to be quick and easy.

She may be Target’s little sister but cityTarget is still a big girl (not ‘fat,’ as my mother would say, just ‘big’). Product organization needs to better promote efficient shopping.

It’s perfectly understandable to have greeting cards on the first floor – bath essentials and pharmaceuticals, too.  But candles and school supplies? Men’s and women’s activewear!?

Take a note from your neighbor just up the block – the first-in-class Walgreen’s flagship at Randolph and State. The bulk of cosmetics and home accents have been pushed upstairs, dedicating much of the first floor to grab-and-go food items, MTO counter space, and liquor.

By no means does this store feel cramped (and I walked the sales floor for the first time among herds of lethargic, starry-eyed gawkers). Still, with a wall of bikes and shelves of free weight barbells, you’ve got to wonder if some departments could stand to be scaled back further.

It’d be interesting to learn the breakdown of shoppers who drive vs. walk vs. arrive via public transit. I can’t imagine many patrons walk out with a bike, free weights or big screen TV’s.

No doubt still testing the product portfolio, it will be interesting to see how/if the product mix of the cityTarget concept changes much in the next few months/year.

We’d be remiss if we didn’t close with an accolade that overplays the obvious.

All in all, cityTarget is awesome. It’s the best of Target where you need it. The interior feels familiar but strives to pay homage to the architecture and unique needs of the people it surrounds. We’ll be regular patrons.
Posted by Unknown at 11:00 AM