Are we having 'FUN' yet, Hallmark?


WAIT. Now that it’s November 1; can I talk about the holidays without an onslaught of verbal spars from my “IT'S TOO SOON” crew?

The card slinger found itself in hot water this week for creative liberties taken with ‘Deck the Halls.’ 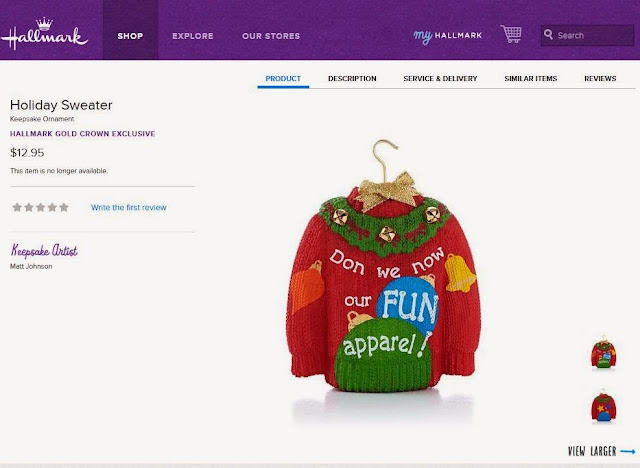 What took so long, news media?

Seriously, a friend and I saw this ornament back in September, shook our heads at the blatant attempt to play it safe, turned and said to one another, “you KNOW there’s gonna be a shit-storm!”

Just when I thought they were in the clear BAM! It’s everywhere on social media.

So Hallmark spoke up, pointing out that the lyrics for "Deck the Halls" were translated from the Gaelic long ago and that the "gay" of the 1800s isn't the "gay" of 2013.  Such "multiple meanings," the company said in a statement, "could leave our intent open to misinterpretation."

Well excuse me, but today’s holly-jollies don’t use the terms “don” or “apparel” either. By that logic, let’s REALLY refresh the line for modern idioms:

Now we wear our festive clothes!

But that wouldn’t sell ornaments, now would it?

All too often we hear stories of brands offending one group or another through omission, mixed meanings, or varied interpretation – and every time I ask myself “how could NO ONE have seen this coming? Seriously, NOT A SINGLE PERSON challenged this in the design phase?!”

Hallmark went to the other end of the spectrum, but in doing so, is being accused of the same – homophobia (through omission).

What’s offensive (and what’s not).

When people see something they don’t like and say “that’s gay” – THAT’S offensive. Because ‘gay’ is being substituted in negative connotation for ‘dumb’ or ‘stupid’.  But ‘gay’ for ‘fun’? I can live with being fun – and besides, IT’S STILL WHAT EVERYONE SINGS. Even little kids at the school Christmas program.

You want to sell a piece of holiday memorabilia but first you want to CHANGE everything that makes it authentic?! You are now marketing a typo.

If I were Hallmark…

And boy, don’t I wish I were! (Seriously, when I’m done working for the man, I’m opening up a small card and gift shop; it’s my favorite type of retail).

…I would have retooled the whole project. The very first moment the lyric was brought up for discussion I would have scrapped words all together (it’s a sweater, it says apparel – get it? Cute, right? No – it’s weak anyways).

Instead, I’dve played up the garish embellishments. It’s a tacky sweater, right? Well then, let’s make it as tacky as possible! Ugly sweater parties are all the rage these days – people will buy it to commemorate parties both attended and thrown. And who knows? If the inventory flies from the shelves, it might be the start of a new annual “ugly sweater collection!” Each year, one tackier than before! Ones that light up and play music, the opportunity for product line extension would be ENDLESS.