Have you happened upon one of LEGO’s free standing US stores? Jam-packed. Every day. Is it just me, or did LEGO wait far too long to step beyond the confines of partner retailer’s shelves? Think of all the lost revenue! 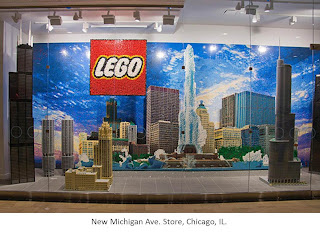 Well, they’re here now, and despite the rising prevalence of shiny, high-tech competition in the toy industry, LEGO is enjoying somewhat of a renaissance.

I’m not afraid to admit I continued to play with LEGOs well after my collection of Hot Wheels and Ninja Turtles were carted off to Goodwill. Heck, I was still pushing LEGO racecars across the carpet when I was old enough to drive a real car.

And still today, I build (and sneak my collection of bricks into the real world anyway that I can).

But enough about me.

LEGO email, catalogs, and packaging are all visually stunning. Truly, the best in the biz. They arrange products in a captivating, action-packed way. Whether showcasing CITY, space, pre-historic or licensed product groups, LEGO brings their building sets alive; drawing buyers in.

And now, a print ad elegant in its simplicity. From the team at San Francisco-based Pereira & O’Dell, four panels visually highlighted with nothing more than a single, 2x2 colored brick. 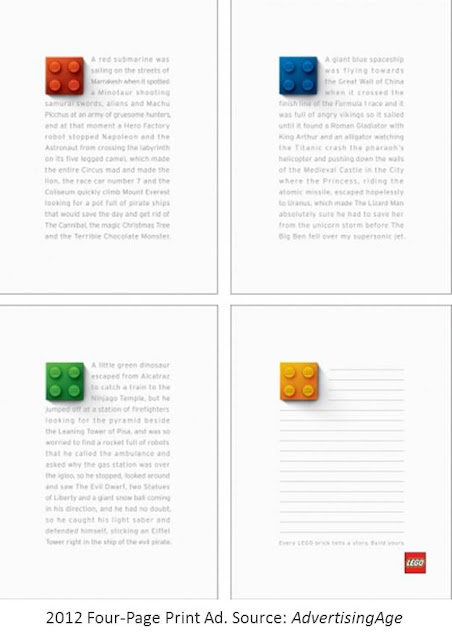 In each of the first three panels, light gray copy tells a different tale of adventure; all made possible through LEGO’s growing library of product categories.

As if the typography, (with its varying degrees of kerning and tracking) wasn’t enough, the magical stories draw you in.  They know no bounds – jumping between time periods, real and imaginary. One minute you’re flying toward the Great Wall of China via spaceship. The next, you’re crossing the finish line in your Formula 1 race car.

But that’s precisely what playing with LEGOs can be.

While video games and other interactive toys have predefined levels and parameters, LEGOs has never been about boundaries. Each day; a new nonsensical adventure waits!

The final panel is highlighted by a single yellow brick (the first piece and color LEGO created back in 1958).It is devoid of copy. Instead, blank lines and a parting sentiment;

“Every LEGO brick tells a story. Build yours.”

Dubbed, “Toy of the Century” (FORTUNE, 2000), this corporate brand-building ad garners a certain respect and esteem due to an organization that’s exhibited incredible stamina in an industry besieged with short-lived fads.