The most impactful marketing is timely.

To follow the outcome of Tuesday night’s election, Kenneth Cole had two variations ready and waiting to print. Up early in time for Wednesday’s morning rush, New Yorkers taking the Westside Highway were greeted with this:
In what has become signature KCole style, the black-on-white clever, play on words celebrates (what we assume to be) Kenneth Cole’s personal preferred election outcome.

Shortly after the erected billboard began to go viral, the designer tweeted out the alternate copy – should Romney have clinched the nomination: 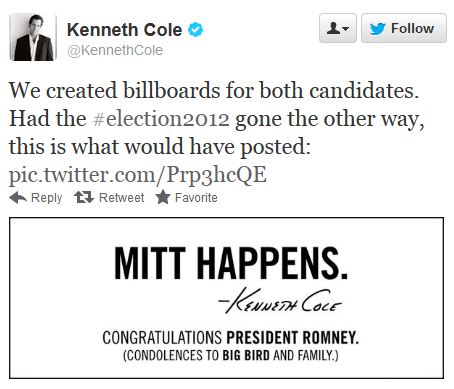 Is it smart for brands to talk politics?

Forget the undecided. For most Americans, political association has taken on an almost a cult-like blinded pride. Members of either party stand ready and willing to defend their deeply-rooted allegiance however possible; verbal spars, animated .gifs, and, when appropriate, vows to ban brand patronage.

That’s the danger of taking a side when trying to appeal to the mass market.

Kenneth Cole’s personal twitter profile clearly states “My tweets are not representative of the corporate @kennethcoleprd feed.” But it’s hard to separate the two, especially with synonymous naming conventions.

What originally got me thinking in this direction was a statement Starbucks made last week on their Facebook page. 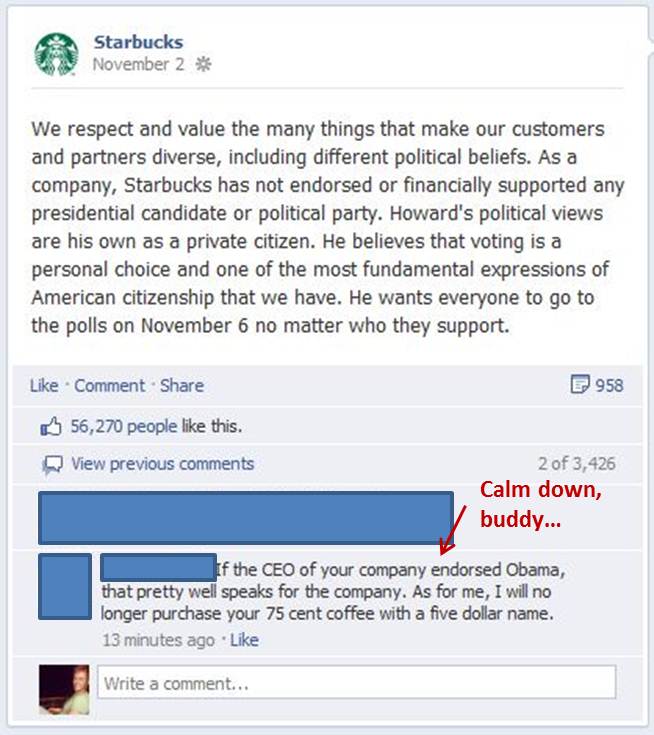 Case and point. Here, Starbucks felt inclined to comment on the rising chatter surrounding the organizations founder and CEO Howard Schultz’s personal support for Barack Obama – to make clear that, as an inorganic business enterprise, Starbucks has NO official political leanings.

Basically, don’t stop buying our goods, GOP-backers. WE love everyone!

The right tone to take, when you are looking to grow market/wallet share (better still if you don’t have to clarify in the first place).

What it all boils down to…

I’ve said it before and I’ll say it again. We don’t grow up we just grow old.

Social media affords brands the opportunity to play human – to have a voice alongside an individual’s friends and family. It’s a great tactic but one that exposes the brand to direct attacks. Humans act on emotion and one never knows what might trigger a response.

Just ask Chick-fil-A (banned personally by this blogger for more than a year now). It’s hard to concentrate on business when you are pulled into a political juxtaposition between a polarized American public.

Pledging allegiance (whether real or perceived) seems to work for some and not others.

For Kenneth Cole, it seems to work.

It’s not our intention to stereotype, but as a NYC-inspired, youth-focused designer brand, there’s no doubt the bulk of KC buyers are liberal. (And are Republicans even fashion-conscious enough to discern between KC and other competing brands as they thumb through dress shirts at the local Sears?). :)

I suppose it’s just another gray area each brand to feel out for themselves…
Posted by Unknown at 12:00 PM