The Coca-Cola Bears are Coming out of Hibernation...!

I knew something was missing last Christmas, but couldn’t put my finger on it until now - the Coca-Cola Polar Bears!

They must have been resting up for the Super Bowl. As if shooting 30- and 60-second commercials weren’t taxing enough, this year Coke is streaming its beloved mascots live from the North Pole for the entire game. 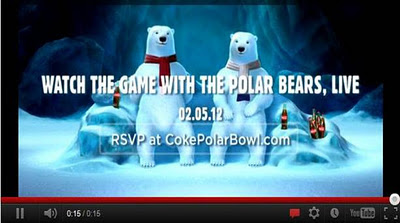 That’s right; at CokePolarBowl.com we humans can experience Super Bowl XLVI alongside our arctic counterparts.  Conceived by Coca-Cola’s digital AOR, Wieden+Kennedy, the website will boast live reactions to on-field activity. Cloaked with team-specific scarves (Giants vs. Patriots) and with the help of game-day puppeteers, the polar bears will show approval, frustration, and other appropriate, up-to-the-minute emotions throughout the telecast.

But don’t just watch the bears; follow them on Twitter (@NY_Bear and @NE_Bear). To provide a truly interactive experience, Coca-Cola has asked its furry mascots to tweet their thoughts as well. Look for them to interact with followers throughout the night via their animated tablets (“BearPads”) and smartphones.

In addition to their live Arctic broadcast, Coke will also be debuting two traditional commercial spots. The specific version set to air will depend on game play and the score up through halftime.

Cool, but where’s the sizzle?

So the bears will cheer whenever their favorite team performs well and “boo” for the opposite; that’s cool with a chance of cute for a couple of plays. Then what?

Did we mention they’ll be reacting to the commercial spots as well? Now were talking!

Coca-Cola has changed the Rules of the Game…

Who doesn’t want to see how Coke’s beloved mascots will react to a Pepsi ad?! While game play responses are logical, real-time reactions to commercial spots will be a riot. ::sizzle::

What’s more, by giving us a reason to check in on the bears after each competing advertisement, Coke brings viewer attention back to their own brand (on competing brands’ dime).

Note: This year’s 30-second commercial spot is going for upwards of $3.5M.

RSVP and be sure to drop in on the “snow-fa” (sofa) to catch some of the antics come Sunday.
Plus, with each RSVP Coca-Cola will donate $1 to the World Wildlife Fund to help polar bears and their Arctic home – we applaud thee, Coke!