A polished Penney is still just a Penney

At least that’s what performance under Ron Johnson’s regime would lead you to believe.

We weighed in on JCP’s new logo and their controversial pro-gay Father’s Day creative last year, so we’d be remiss not to comment on the changing of the guard.

Johnson Out, Ullman (back) in.

Johnson, a former star executive from both Apple and Target landed at JCP with such promise; now, ousted from his post as CEO after just 16 months. In a true “Leno 2.0” Tonight Show fashion, the board brought back Mike Ullman, a man who held the post for 7 unimpressive years leading up to Johnson’s arrival in late 2011.

Was it too soon?

Erratic decision making is the mark of a [brand] in distress. You can have empathy for JCP’s plight; it’s easy to play “wait and see” when you’re not already fighting for survival.

As marketing professionals, we have a heightened sense of awareness for the idiosyncrasies of branding. But surely the general public can note there’s been something fresh and new with regards to the last twelve months at JCP.

Creatively speaking – There’s a new energy and spice in their fast-paced, musical TV spots; there’s a great vibrancy and flavor to their print ads and store fliers.

While the changes made might not have resonated with legacy shoppers, it was by design. Far too reliant on an aging population, Johnson’s JCP was meant to woo a new generation of buyers. And his leadership was pulled before the aura of the transformation had a chance to deliver new demo dollars.

Attention, Interest, Desire, Conviction, Close – remember the Sales Cycle from Marketing 101? Well, it takes time to work its magic. Johnson’s changes definitely secured attention and interest; maybe a bit of desire as well. But conviction and close didn’t come fast enough for the board. 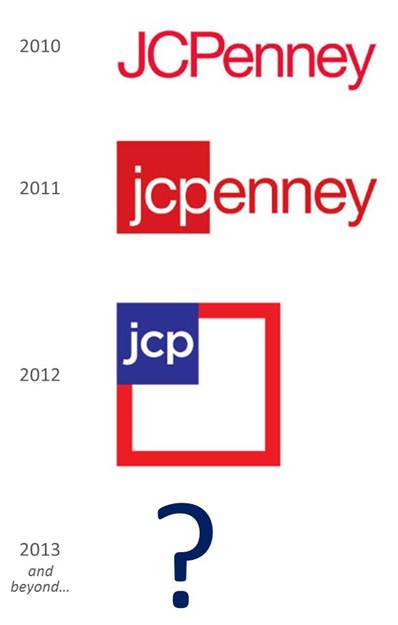 What new vision does Ullman bring this go-around and what magic could it work over Johnson’s vision that would finally move JCP off life-support?

Is his (re-)post interim or permanent? Is the goal to win back legacy loyalists? Continue to rattle new, younger demos? Or, is it a mixture of both and a way to merely slow the pace of change?

Neither reign delivered dollars but at least Johnson’s JCP had personality and character. The brand felt alive once again. Although not part of Ullman’s vision, he’d be a fool not to carry the bulk of the new features forward.

The story isn’t over, but this marketing cynic is skeptical we’ll find a happy ending.