It’s June – the month marketers usually bench creativity in favor of the simple rhyming convention “Dads and Grads.” Look, we get it. Early summer burnout – no one wants to think too hard about in-store promotions. There is one major retailer however; hell bent on breaking tradition in its pursuit of attractive new markets… 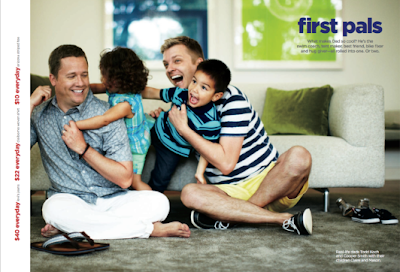 Visibility and acknowledgement have long been a problem in the gay community. So when promoted alongside hetero-sexual counterparts, same-sex sells.

And while ultra-conservative groups like One Million Moms continue to condemn the retailer for promoting alternative lifestyles – we hope JCP will keep the gay coming.

Both ads are subtle enough that they fly below the radar of the quick skimmer. Still, JCP is slowly but surely exposing a more fidgety nation to the idea that the loving family next door can be non-conventional.  With repetition and other retailers joining the fold, hopefully these types of ads will soon be common place and feel “natural.”

And while we’re on the subject of JCP…
How’s that new direction we discussed back in February going?

When newly appointed CEO Ron Johnson set out to rehabilitate the stodgy, aging retailer – he led the charge with a major overhaul to the company’s pricing strategy. But lately, it’s as if fair and square pricing has taken a back seat to campaigns that are pure brand.

And while JCPenney commercials of the last few months have been filled with rich, bright colors and video capturing the random playfulness of life – they haven’t reassured regulars that a retail world devoid of coupons can be good.

Perhaps JCP’s 15% miss against Q1 projections might have more to do with customer confusion than a lack of new brand resonance. It’s time to go back to basics and use commercial time to explain the new pricing strategy in more explicit terms.

The retailer should also fast-track legacy store renovation plans to bring drab, dim-lit in-store experiences up to match the fresh, new brand personality conveyed in the catalog and on TV.

Hang in there, JCP – you’ll find the right rhythm soon enough!
Posted by Unknown at 9:00 AM