Is that the Most Recent Stock Photo You Could Find?! – Monday Gripe

I’ll admit I can be exceptionally bitchy on Mondays – and I’ve really nothing new to blame.

Like a dessert tray in the buffet of life, the weekend was pulled away before I could get my fill. As with the bulk of my 9-to-5 cohorts, I resent being shackled back to my office chair.

And so, things that might go unnoticed on [anything-but-Mon]day can really set me off.

This week’s culprit:
CONAN on TBS

Now, I’ve got nothing against Conan. There’s an authenticity in his self-deprecating humor that I find refreshing. And although I’m not a frequent connoisseur of Late Night, he’s always reigned supreme in my book. (It also doesn’t hurt he proved a significant contributor to some of the best years of my all-time favorite franchise, The Simpsons).

Well, today marks the start of a short, five day run of taping for CONAN here in Chicago. To drum up local excitement, (and no doubt glue more butts to seats), promos like this have been circling the Loop for weeks: 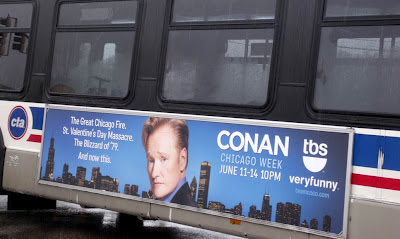 Now Conan looks good; his expression is authentic.  And the copy isn’t bad either – perhaps a bit over-hyped (even for sarcasm).

I mean, could they not find a more recent picture? I’ve only lived in Chicago a year but even I can tell there are several key players missing. Where’s Trump Tower? How about the other half of the Blue Cross and Blue Shield Building? Is that even half the towers now occupying Lakeshore East!? 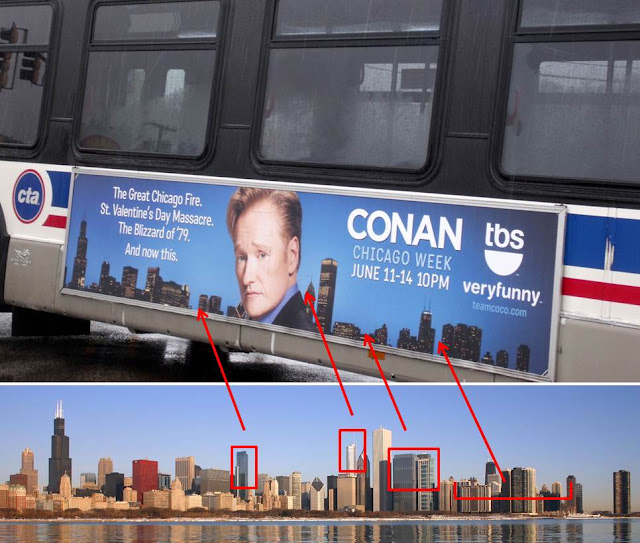 The shot selected has to be at least 6-7 years old.

Why does it matter?

It’s a local promo – I’d be less likely to rant if this was a national promotion and Chicago was secondary to the message. But Second City is the whole point and the ad is running here. Get it right.

Stock photos are a dime a dozen – You can’t tell me more recent shots of the skyline aren’t available. The variance in price between this and something current would be nil. Do your research.

Details matter when you’re playing on someone else’s turf.

It’s as if Team Coco doesn’t take Chicago seriously; like they don’t feel they need to get to know/respect our city.

Care enough to get the details right.

Email ThisBlogThis!Share to TwitterShare to FacebookShare to Pinterest
Labels: Ad, Advertising, Chicago, Conan, Fail, Marketing, Positioning, PR, Promo, Promotions, What NOT to do