Ice cream, with a side of bacon

You know, Burger King launched a “new menu” back on April 1st. 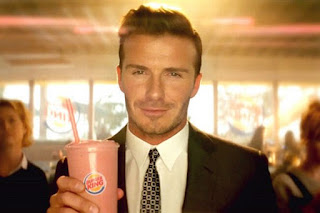 Don’t take it personal, David Beckham. The chain’s largest menu expansion since inception boasted nothing more than what had already been available at McDonald’s for years. Premium salads and coffees, snack wraps and smoothies – it’s no wonder it fell largely on death deaf ears!

With the official start of summer next week, the big 3 fast food chains are shaking up their menus – eager to attract sun-soaked, famished snackers.

McDonald’s added a S’mores Pie, new smoothies, and dropped the price of their vanilla cones to a mere 50 cents at some locations (if interested in a map of participating locations in Chicago, let me know – I tour them in a vicious cycle).

Wendy’s brought back their summer favorite Berry Almond Chicken Salad and beefed up their Frosty line to include a strawberry shortcake parfait. 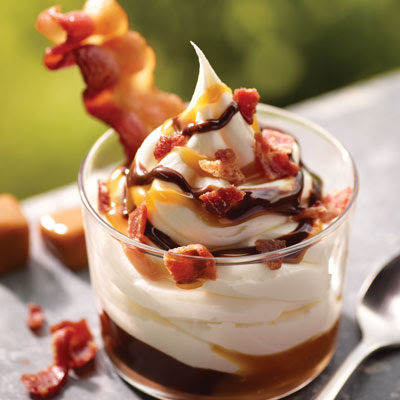 The vanilla soft serve is topped with fudge, caramel, and bacon crumbles and is paired with a slice of bacon “for dipping.” It weighs in at 510 calories, 18 grams of fat, and 61 grams of sugar.

At first it just sounds disgusting; an artery-clogging, food coma-inducing nightmare.  But hold on, BK might be on to something here. The cool, sweet vanilla would pair nicely with the rich, maple spiced bacon – a sort of salty/sweet swirl in your mouth.

So the sundae might have some (marginal) culinary street cred, but that’s not the point.

It’s the “bearded lady” of BK’s circus; an attraction designed to lure curious gawkers and non-believers (KFC’s ‘Double Down,’ anyone?) You may try it, you may not. But once inside, Burger King hopes you order something. It’s their chance to dazzle you with their “new menu” in the flesh. Who knows? Maybe you’ll discover a new favorite and visit again.

Maybe it’s just that it’s close to lunch and I’m famished, but I’m onboard. Heck, I’m a sweet potato fry/pulled pork junkie – I might go for the gold and try all three!

(...after my trip to Costa Rica next week)

If you stop by your local BK this weekend and decide to give it a try, report back!
Posted by Unknown at 8:00 AM