Smiley-face Stickers Really Do Make it All Better…

When Chicago-based FM News Radio station 101.1 decided to use former Governor Rod Blagojevich as their “spokesperson” sans consent, they must have known it’d be short lived.

And yet, the station forged ahead. Over 200 billboards featuring the imprisoned governor sprouted up overnight. 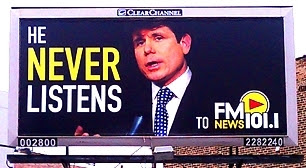 It wasn’t two weeks before the station received a letter from Blago’s attorney’s asking if they might “get together and discuss the ads and the Illinois Right to Publicity Act,” which, by the way, precludes using another person’s identify for commercial purposes without consent.

And up went the sticker. 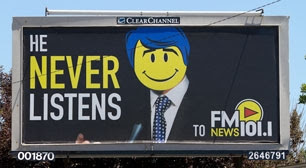 While the station maintains that it was concern for the family expressed by listeners that prompted the change, we can’t help but wonder if the whole 1-2 punch was premeditated from inception.

Are you saying place a campaign you know you’ll have to renege!? Why?

Why not? Local radio ads have to be salacious if they’ve any hope to break through.

The creative team behind the ad banked on the scandalous photo and copy to get people talking. Who knew? With a bump in buzz, maybe a few non-listeners would find themselves intrigued, tune in (if for the controversy if nothing else), and convert.

It turns out a few weeks is all you need when paired with a little bit of drama.
The ads are slated to remain up in their altered form through the end of June, but ratings at the station have already started to climb.

And with the former governor’s image technically spared, the lawyers’ claws are retracted.
I guess the campaign was a success!