The London games kick off one month from today.

I’m not the biggest sports enthusiast, but I’ll tune in for the pageantry and OTT fanfare (oh, and gymnastics). There’s something special about the promise and promotion of peace during the Olympics – the music, the lights, the poetic verse coupled with opportune images of tearful competitors…

Under any other circumstance, the very mention of peace can feel like a placating pipe dream.

While the torch burns, however – it feels within our reach.

Where was I going with this again?

The 2020 Candidate Cities have been chosen!

Istanbul, Turkey | Tokyo, Japan | Madrid, Spain
(although I suppose you figured that out from the title)

And here’s where 30 Thousand Feet comes in – the logos!

The bidding process has come a long way since the inception of the International Olympic Committee (IOC) in 1894. While technology and CAD-generated renderings bring would-be Olympic villages and arenas to life, the logo still remains a HUGE part of the bid.

It needs to communicate the defining qualities and rich heritage each candidate city would bring to the games. It has to be both aesthetically pleasing and psychologically motivating.

The logo is a HUGE part of communicating vision and (ultimately) securing the Games!

While Madrid and Tokyo have already unveiled their bid logos, Istanbul is leaving the decision in the hands of the Turkish people. Here are the final 5 logos in competition.

The National Olympic Committee of Turkey (NOTC) plans to announce the winner just prior to the opening ceremony of the London games. But for the sake of discussion, let’s select our favorite now. 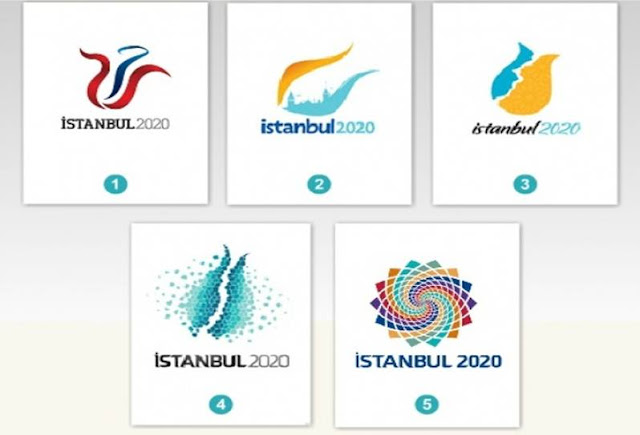 Now, I’m not Turkish. I lack the luxury of calling upon a native heritage when levying my vote (I did spend the better half of day in the country last year, does that count?).

But I do know marketing, branding, and I LOVE logos.

Support rationale in order of rejection:
1). Too simple and too American. It might be all that patriotism coursing through my veins, but this version falls flat and feels too western world. I want to see more ‘Turkey’ in the logo!
4). Yow-za. I’m not even going to mention what this one resembles (although, I suppose it would fly below radar of those spectators too young to have taken Sex-ed).
5). Holiday wreath meets psychedelic pinwheel – it’s OK, but the array of colors is bound to clash with the mandatory Olympic rings.
3). Runner up. Simple, but not too. Feels more like Turkey.

Number 2 reigns supreme because it combines the best elements of the others. The skyline adds a bit of much needed personality and the colors feel more “Eastern European.” I’d almost like to see a combo, the image from 2 and the fonts from 3, but that’s another fight for another day.

Now, Istanbul vs. Tokyo and Madrid – who gets the gold?

Conceptually speaking, each mark is vying to represent the exact same product: the 2020 Summer Olympics; one event.

In reality however, each stands to embody a very different experience. To the victor goes the unique opportunity to make the Summer Olympic games their very own – to show the world who they are.

Man, this is tough.

Still, we’ll try to judge on aesthetics and first impression.

Bronze: For us, Madrid’s is a bit too playful. Are those supposed to be flip-flops? Because that’s all we see. Going with that, the straps look like they make ‘20020.’ Get rid of one of the ‘zeros’ and we’ll call it clever.

Gold: Here, we instantly see the Olympic torch – a constant element spun through the games since their inception. Both proud and humble; it feels authentic to the culture and to the spirit of the games.

Who will host the Games of the XXXII Olympiad in 2020?

The victor is scheduled to be elected at the 125th IOC Session in Buenos Aires on September 7th, 2013.

This time, it looks like either Europe or East Asia will get to play host!

It’s the first time in 20 years that no city in America has bid to host the Summer Olympics (we’re still fuming from Chicago’s upset in the 2016 running). By 2020, it will have been 12 years since an Asian country hosted (Beijing, 2008) and 8 years since a European nation hosted (London, later this year).

With London kicking off a month from today and Rio de Janeiro having secured the 2016 games –
Let the race for 2020 begin!
Posted by Unknown at 8:00 AM