It’s been a slow couple of weeks as far as new logos go – which is surprising, as the traditional summer lag that plagues retailers and B2B sales alike is usually the most ideal time to launch new branding efforts – getting them hammered out before the year-end spike. 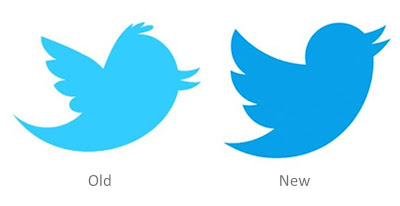 He got the muss of feathers on top his head plucked back, lost a few lbs. around the midsection, and took on a bolder, less-pastel shade of blue.

Things are looking up…

If Larry was facing 3:00 before, he’s got his sights set at 2:00 now. Team twitter elaborated further in a blog post earlier this week, saying:

“Our new bird grows out of love for ornithology, design within creative constraints, and simple geometry. This bird is crafted purely from three sets of overlapping circles – similar to how your networks, interests and ideas connect and intersect with peers and friends. (…) a bird in flight is the ultimate representation of freedom, hope and limitless possibility.”

We couldn’t have put it better ourselves!

With new Larry, Twitter also hopes to finally drop all other conflicting brand elements – the lowercase ‘t’ and bubbled typeface ‘twitter’ – more typically used by partners and with shareable content.

The slight modifications in appearance and orientation pay off in a big way. With slimmer body and more active pose, the icon better represents the full potential of twitter.

Original Larry feels amateur. He’s all about playful tweets, a way to pass idle time rambling over the seemingly mundane.

We say ‘yes!’ to dropping the ‘t’ and ‘twitter’ icons as alternate brand identifiers. Users (casual and serious alike) already identify the bird as the universal symbol of Twitter –the single lowercase ‘t’ was too similar to tumblr’s icon anyways.

Social Media latecomers will immediately understand Larry – and you’ve got to make it easy for the laggards. ;)

‘Wins’ all around – kudos on refining your brand experience!
Posted by Unknown at 7:00 AM