Chevy Volt Comes Out to its Parents in LGBT Ad

It wasn’t about to miss its first Pride Parade!

June is upon us, and the circuit of Summer PRIDE Celebrations is underway.

Motor City hosted theirs last week. To celebrate, General Motors released an ad that broaches the all too difficult subject of “coming out.” 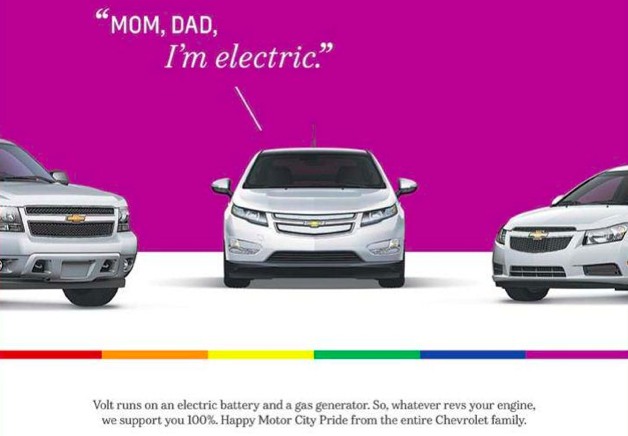 Don’t let the American Auto Industry fool you. It took driving recklessly to the brink of bankruptcy before any of the Big 3 really started to pursue innovation in technology and design.

No doubt incoming GM-ers struggle to invoke change as they climb atop the shoulders of long-held traditions that echo the established values and sensibilities of the organization’s founders.

And since “hip” and “new age” don’t immediately come to mind when you think about General Motors, they are entitled to a degree of acknowledgement and respect when they post an ad in open support of a polarizing subject like homosexuality.

The lighthearted ad depicts the moment when a Chevy Volt must ultimately face the truth, step boldly from the closet and proclaim, “Mom, Dad, I’m electric.”

And for GM, isn’t ‘electric’ the perfect parallel for ‘gay?’

At the product level, GM’s decision to feature an electric-hybrid was a smart play to address a community that is, by and large, known for being more “eco-friendly.”

But maybe the reason the ad works so well is empathy – the Chevy Volt’s plight feels similar to the real dilemma one faces in coming out.

(Hear me out – it may undermine the emotions of a very real life event, but the supporting logic is there).

Admitting you’re electric to a long legacy of gas-guzzlers would be hard. And as one of GM’s first hybrid-electric vehicles, the Volt lacked the luxury of having others come before him to lay a foundation of tolerance and understanding with older models.

All in all, we’re glad to see the Volt’s alternate lifestyle was accepted with open arms doors.

In a more perfect world, everyone’s “coming out” would be greeted with similar compassion and understanding.

Wait, so are all Chevy Volts gay?

Don’t count on it.

The automaker’s bikini-clad “Volt Recharge Lounge” at Coachella would indicate otherwise. Let’s see, according to Wikipedia there have been 15,054 Chevy Volts sold in the U.S. (as of 5/31/12).

With those stats, we’re thinking at least 151 Volts are openly gay while 1,505 of them have at least tried it.