Look, we applaud TGIFriday’s for taking ‘restaurant mobile applications’ to the next level – that is, theirs is more than a virtual black book of locations, hours of op, and directions. But we’re not sold on its marginal utility over and above. …Usually.  Reviews indicate “My Friday’s Tab” is not without its glitches. Ideally, the app syncs with the restaurant’s POS system, allowing patrons to track and pay their tab without ever having to pull out plastic or cash.

The tip defaults to 18%, a number app developers claim is more often adjusted in favor of good service rather than against; so that’s good.
The feature also makes splitting bills easy – allowing individuals to select and pay for individual items. 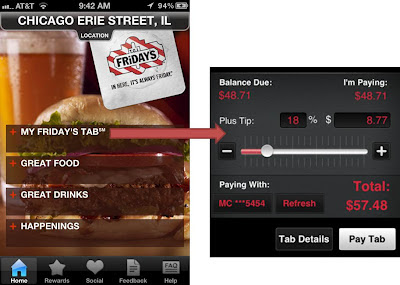 And without further adieu, we introduce a new 30k Feet feature we’re calling “Five Years Out.”
Posts will highlight IT innovation that’s a definite step in the right direction, but fall short against our (incredibly high) expectations.

True, one must learn to crawl before they walk and walk before they run. Still, it doesn’t hurt to dream big and constantly push for more!
For now, back to TGIFriday’s mobile app:

What we’d like to see…
The ability to actually order

Receiving payment is good, taking orders would be better.

It’s not that we’re antisocial, but sometimes we’re in a hurry. And don’t worry – there’d still be plenty of opportunity for face time with the wait staff – (especially if the order function included a “refill request” feature). :P

When it comes to pairing traditional and virtual brand experiences inside physical locations, mobile apps should pick up where more customary tools leave off.

I don’t need to scroll the menu on my smart phone when I already have a ketchup-stained, plastic-coated one splayed out in front of me.

What would be nice, however, is the ability to swipe through photographs of each entrée, appetizer and dessert offering – coupled with previous diners’ reviews (be them positive or negative).  The added functionality and interaction would allow guests to really choose what “looks good” to them.

Ever have a favorite dish you can never remember the name of? You return to a restaurant after a long sabbatical to find all the salads or chicken entrees look the same? Add a little “heart” icon to each menu item and give users the ability to activate it at will.

We’d chastise anyone who used it, but the app should seamlessly jive with Facebook and Foursquare check in functionality.

I guess that’s enough for now – you hear that, TGIFriday’s? Good job, but there’s work to be done! Hop to it!

Try it out for yourself and report back! Is there anything else you’d like to see?