A second logo before your product even launches!?

Why not? Mother always said first impressions were everything.

And when you’re talking about launching a brand, the logo is a huge part of that impression. To ensure take-off, it has to capture the very essence of the product.

Shortly after leaving CBS in May of last year, Katie announced a deal with ABC to develop and host a day-time talk show starting in the fall of 2012. Now, that’s a lot of lead time.

To provide the media with something tangible to chew on, the network developed this creative: 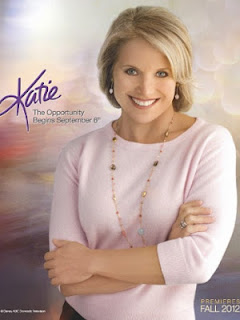 Although never considered the final representation for the new deal, it served the simple utility of attaching to various press releases while capturing Ms. Couric’s aura perfectly.

Fast-forward a year, and it’s time to get real. The show’s Executive Producer announced earlier this week that the official premier of Katie will be Monday, September 10th.  Gone was the placeholder creative of soft purple, cursive writing and the smiling Couric herself.

In its place, the show’s official logo: 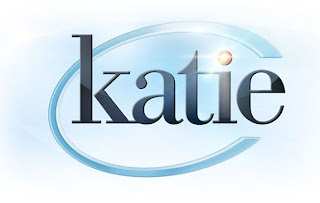 Yea, this feels awkward to me. The first thing I thought of was ‘feminine hygiene.’ The color palate and circular movement feels a little too “Summer’s Eve” for me…
And was the oval-esq frame intended to be a “C” for “Couric,” or is that just a coincidence?

If I can force the thoughts of feminine care from my mind, it still feels a bit out of date – at best, early 2000s; at worst, late 80s jazzercise video.

Wait, is the logo meant to represent Katie, or ‘Katie?’

Maybe that’s our issue – we’re thinking about it the wrong way. While the first creative sample was designed to reign in Katie the person and all she may bring to the network in style and flavor, the second is tasked with representing the show itself – capturing its unique tone and intended (broader) position.

While we have no doubt the similarities between both the person and show will be many, it is important we try to separate the two in our minds – especially if Katie intends to host/guest interview on a variety of other ABC broadcasts.

Still, if the show’s logo is an accurate indication of what will inevitably manifest on-air, I don’t think the concept will take wing. America can love Katie but hate the box she’s put in. I guess we’ll find out come September…