Who is Mid-Calorie Soda For?

Coca-Cola announced this week that they’ll be testing mid-calorie versions of both their Sprite and Fanta brands this summer. Released in only four markets, Sprite and Fanta Select will boast half the calories of their regular counterparts and be comprised of a blend of both sugar and other artificial sweeteners, including Truvia.

Select comes on the heels of rival Pepsi’s introduction of NEXT earlier this year. 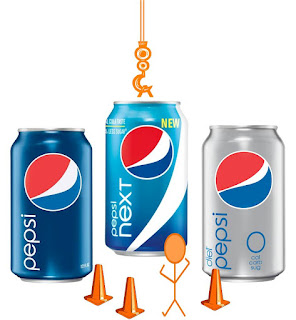 Both companies have been down the low-sugar/calorie road before – (Coke with C2 back in ‘01 and Pepsi with Edge in ’04). Each was pulled after disappointing sales.

‘Disappointing’ perhaps because no one identifies with middle-of-the-road cola!

Who are these sodas for, exactly?

I recently had a lively discussion with a friend in the ‘biz. We agreed that over the natural course of time and by boasting two distinct tastes, regular and diet sodas are directed at two mutually-exclusive consumers.

Somewhere along the line, researchers must have concluded that “Diet” was perceived by some as feminine, leaving a segment of the soda market under-served.

Yes, men not quite comfortable enough with their sexuality to roam the office halls with a can of Diet were taking their hydration elsewhere.

And so, the decision was made to split the category by gender and the “masculinizing” of diet soda began.

Today, men can stay (comparatively) healthy with Pepsi One and Coke Zero – both seeming to boast “regular cola” taste. 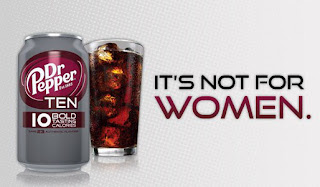 They say variety is the spice of life

And so from time to time we get new flavors– cherry, vanilla, cherry vanilla, lemon, lime – all small attempts to infuse variety into otherwise routine cola purchases. And while these limited runs cannibalize classic flavor sales more than they produce net-new, with more selection comes the chance of increasing frequency and total brand consumption.

So, to recap: we’ve got regular, diet, men’s diet, and novel flavors from time to time (diet and regular).

Which brings me back to my first question:
Who is this new mid-caloric tier of cola designed for?

No clear target. No sizable hole to fill in the total cola marketplace. Is this a long-shot hope that with less sugar, cola might be welcomed back into schools? Is there a glimmer of hope that the new combination might one day replace the sugar-heavy recipe of original cola; even start to dominate in share of total sales?

This blogger remains unconvinced. I (still) see no way around a short life and quick demise.
Posted by Unknown at 8:00 AM