Ok, we realize this story is nearly a year old – but it has been a bit of a “new logo dry spell” as of late and we can barely stand it.

You’re probably not as logo-obsessed as us, so allow me to bring you up to speed on what we’re calling –  a Tale of Two (Three?) ‘Ws.’ 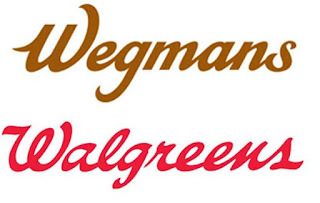 There’s only so many ways to draw a “W”

Walgreens had reason to be upset, but Wegmans’ proposed change in image wasn’t new – looking back over the brand’s rich history, one could easily see the brand used a similar type-face in the 30s – adding merit to the notion the change was as likely a tribute to the brand’s heritage as it was a conspiracy to erode any part of Walgreens business.

Faced with empirical evidence of the logo’s past, Walgreens narrowed their case. The national drugstore chain focused more specifically on the likelihood of confusion between shorthand versions of each that simply feature scripted “Ws” – a look Walgreen’s has trademarked for their Pharmacy and pharmaceutical products. 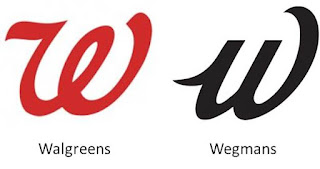 Both companies have a tendency to opt for the space-saving versions of their brand on private label items and most interactive/social media promotions.

So, what did they settle on?

Wegmans must discontinue its use of the “W” logo by June 30th of this year. It was determined that by that time, much of the stock already produced with the scripted “W” would have been depleted, and that Wegmans would have been able to revise packaging without a undue amount of monetary stress.

The supermarket retains the right, however, to continue using the full “Wegmans” name in script.

Someone Needs to Take [Walgreens] Out to the Ballgame…

We agree Walgreens pursuit of Wegmans was not without merit, but what about the Washington Nationals?

They’ve used their scripted “W” for nearly fifty years (without registration) and it’s nearly IDENTICAL to Walgreens’ mark! And yet, Walgreens has brought no action.

What does it prove?

While brand is huge, the scuffle between Walgreens and Wegmans demonstrates how increasingly delicate the situation can become when one narrows their view down to like industry. High stakes are raised even higher when business are vying for the same pool consumer dollars.

Should the Nationals begin using their “W” on household items, we may face quite a different future.

You have to own your position and guard it with your life.

It can stretch far beyond logos and taglines as well – in-store and online, Target would never use blue and Walmart wouldn’t dare use red.

Brand. Is. Everything.
Posted by Unknown at 7:30 AM