Arby’s has a new logo…not really.


From flat, neon red, and all-caps to a 3-dimensional, bolder maroon, and lower-case, the new Arby’s logo is as conservative a change as any. 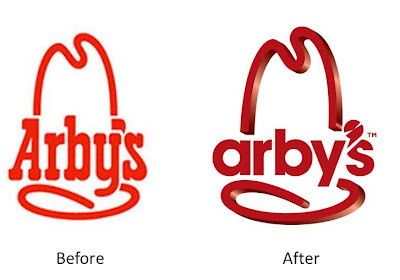 But the brand mark’s apostrophe is just the first slice of change for a chain about to turn 50.

When I say “fast food,” what immediately comes to mind? Does Arby’s even fall in the top 10?

Let’s be honest,
Despite their last positioning statement, no one’s ‘thinking Arby’s.’

For as long as we can remember, Arby’s has tried to carve a niche for itself through differentiation.

It’s a marketing no-brainer for a restaurateur lagging behind fierce competition.

So Arby’s built a modest legacy off the backs of both its signature roast beef and curly fries.
But it wasn’t enough.

If differentiation via menu mainstays can’t get the job done; can repositioning as “fresh?”
This time, you may be on to something Arby’s…

Maybe the secret to breaking through has been there all along; quietly gliding back and forth, slicing roast beef just behind the register.

No one thought to promote freshness in the 70’s and 80’s because frankly, no one cared. But we’re a hyper-healthy (yet fatter than ever) America now and maybe “Slicing Up Freshness” can prove highly-salient.

Watch Arby's Latest Spot: "Slicing Up The Truth About Freshness"
No Arby’s DID NOT just attack Subway head on?!

If chains like Subway and Chipotle can build an entire business on freshness, there’s no reason Arby’s can’t make a hard right, back pedal a bit and fight a new group of thugs. Or is there?

Too little, too late?

With more than 10 new menu items slated to debut over the next 12 months, Arby’s is trying to move from one over-saturated segment to another. All without a sizable enough footprint to capitalize on volume (Arby’s global footprint could fit inside Subway’s pinky toe – approx. 3,500 restaurants, to Subway’s 34,000).

You kept the 10-gallon hat for a reason…

If this repositioning effort doesn’t take hold (and we hope it does), maybe it’s time to go back to basics?

If I were Arby’s, I’d look to build out a stronger presence in niche geographic markets – capitalize on my truly differentiated “Western take” on fast food. Not steamroll it across all of America, but where it may resonate most.

It might not be global, but it’s got to be an easier road.
Posted by Unknown at 11:00 AM