Attending high school at the turn of the Millennium meant waiting with bated breath for the arrival of Abercrombie’s Quarterly Catalog – (at least for me).

Abercrombie was THE must-have brand if you were to have any chance of being popular. No longer the case, from what I can gather with my limited exposure to today’s teens in-the-know.

So Abercrombie killed their catalog in 2002 after four states threatened legal action over its lewd content. And although in-store advertising continued to feature scantily clad 20-somethings with perfectly chiseled bodies, much of the publicity and chatter around the brand died with Quarterly.

Aside from the occasional mild drama that arose from t-shirts with double-entendres gone too far, the brand faded into the background.

I blame a product/demographic miss-match. Teenagers buy clothes based on trend - what’s new and now. Abercrombie designs clothes based on building an enduring, iconic brand – consistent and unchanged. So while competing teen clothiers like Express, Forever 21 and the like stay afloat by capitalizing on quick-moving fads, Abercrombie spits out more of the same. They are the Ralph Lauren of teen apparel and that’s simply not how teens like to buy clothes.

But, there are certain universals that never go out of style – especially with rebellious teens.

Sex and controversy always sells (and Abercrombie & Fitch needs all the sales it can get).

And so, A&F returns to the scene – bar rose. We’ve been teased for years with homoerotic images and now finally, Abercrombie is injecting a little male-on-male romance into one of its marketing campaigns.

“Other Sports Require One Ball” is a video campaign shot by famed photographer Bruce Weber, (view the ad here). 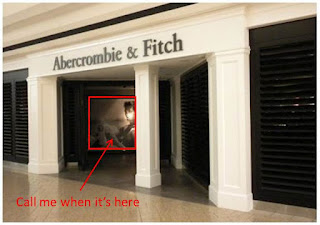 Although I doubt images from this shoot will ever grace the larger-than-life frame that sits at the front of each A&F outlets, it is great to see the brand giving a bit of a nod to the lifestyle of so many store regulars.

It only took year-after-year of same-store declining sales and a bout with irrelevancy, but we’ll take it. :)
Posted by Unknown at 9:00 AM